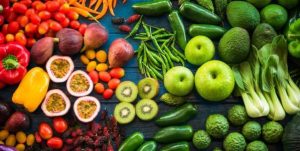 It probably goes without saying that what we eat has a significant impact on our health but it can be a nutrition minefield and people who are already struggling with illness need to be extra vigilant. But where do you start? There’s so much conflicting information out there, it’s difficult to know what to do for the best.  So, I thought it might help to pull together a quick collection of generally accepted ideas.

Nutrition alone can’t cure Lyme disease, but it is part of what I refer to in The Kiss of Lyme as “boost what you can,” because eating the right foods will give your Lyme treatment the best chance of success. However, everyone is different and just as with treatment protocols, people react differently to foods, so it’s about finding out what works for you.

General wisdom around treating Lyme suggests our foods need to address several areas, with the first being to reduce inflammation, which arises as the immune system is attacked.  So, you’re looking for foods and spices with anti-inflammatory properties like:

As well as reducing inflammation, you also need to build up the immune system which is all about vitamins and nutrients such as:

Just as important as what you eat, is what you don’t eat.  Whilst, according to most reports, the foods mentioned above are believed to help you, the food that nearly every physician and nutritionist recommends eliminating is sugar because it places unnecessary burden on the liver which is already working hard to get rid of the toxins. It’s amazing when you look at food labels – before I was ill I rarely considered back panels, but at times I took on aficionado status as I stood in the aisles trying to determine good from bad – just how much hidden sugar there is in food.

The other big “No’s” that are often mentioned in the same category as sugar are alcohol and caffeine so it’s probably best to avoid them. When I first became ill, the non-alcoholic drink scene was somewhat in its infancy but now there’s so much choice, you don’t have to sacrifice taste as much as you once did.

The digestive system is the body’s first line of defence against illness, as much of what we consume is laden with micro-organisms that could cause harm to a weak immune system – which is why nearly all Lyme patients suffer with symptoms such as nausea, bloating, IBS, constipation and diarrhoea.  So, building a healthy digestive system is important when fighting chronic infection and that means avoiding foods that your body struggles with, which is likely to be different from person to person but often falls into categories of:

whilst adding foods which aid digestion such as:

One of the side effects of treatment for illness is the production of toxins, which your body will attempt to get rid of by working the liver and kidneys. You can give your liver and kidneys a helping hand by:

This is a quick summary of my research into nutrition for fighting ill health, free from all the technical explanations that I sometimes feel are included to bolster the author’s credibility rather than our understanding.  It is by no means an exhaustive list.

I don’t believe there is a single menu of foods that will be right for everyone but rather it’s about finding a nutritional balance that works for you.  You may decide to do that with trial and error, or you may choose to enlist the expertise of a nutrition expert.

Over the coming months, I’ll be adding more advice on nutrition and other subjects (if you sign up to my newsletter, I’ll let you know when something new is published), but if there’s anything you’d be particularly interested in reading, please get in touch

If you have any comments, stories or suggestions please get in touch
Contact